The holy Monastery of Panagia of Prousos is 29 km. away from Karpenisi. The monastery is built beneath the asphalt road level, at the edge of a small canyon-shaped formation, in a location with a unique and rough geographic relief. What attracts us the most is the clock on the hill across the Monastery, along with the impressive house of the School of Greek Language built next to it in 1819. 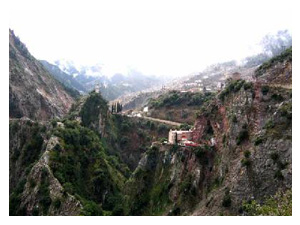 It is said that the two fortress towers called “Karaiskakis towers” were built to protect Karaiskakis, a hero from Agrafa, during his nursing care here in the area of Prousos. These two towers, the east and the west tower, offer a wide view to the surroundings of the Monastery and to a ‘mini” canyon as well.

The monastery of Panagia of Prousos encloses the katholikon dug into the mountain and the auxiliary buildings of the monastery (cells, dining room, guest rooms). It houses a museum with significant exhibits such as vestments, golden chalices, handwritten codices and Karaiskakis’s sword! The miraculous icon of Panagia is kept in the place where it was found, having added to it only its silver cover given as a present by Georgios Karaiskakis in 1824. The Holy Monastery is surely an attraction for the so called religious tourism and it is estimated that approximately 200.000 people visit it every year.

After the junction (on the left, downhill) to the Monastery of Prousos, the same-named village is unfortunately not so much visited as the monastery. Anyone arriving at Prousos in winter realizes how abandoned the village is, though it is built on a slope full of oaks and Greek fir-trees. Prousos is divided in many boroughs, which used to be more in the glorious past, composing a large settlement complex that doesn’t exist anymore. In fact, the houses in Prousos are quite many even nowadays, but the permanent residents are not more than 50...

The village took part in the important historical course of the Monastery as well. The Agathideios library (built in 1881) with rare editions from Leipzig at the central square and the Katsabeio High School are two important sights to see. Nevertheless, there are some taverns at the central square of the village to welcome the large number of people visiting the Holy Monastery. There is also a shop at the square selling folk art items.

Back to the exit of Prousos, on the left to Tornos - Kastania. After 2 km. and before the iron bridge, there is a beautiful tap fountain on the right side and a place with wooden benches. Thus is where the picturesque path to the Black Cave begins (approximately half an hour to walk). A few meters before the iron bridge, there is a road down the hill on the left, leading to the sausage manufacture, an enterprise that gives a bit of life to the local area.

On the way to Tornos you have a different and more “clear” view to the monastery complex of Prousos.