From the junction to Mikro Chorio to the right and to Megalo Chorio to the left, after 1 km. we arrive at Gavros. It is a village situated in a very beautiful spot right next to Karpenisiotis river. It is an ideal place to rest and have a tasteful meal at the village’s taverns or visit the folk art shops. Along the river there is a trout farm, beneath the highest peak of Kaliakouda mountain (2.101 m.)

Further on to Prousos, two kilometers after Gavros, the landscape changes: the waters of Karpenisiotis river move with greater force, the place becomes narrower and we enter into a canyon-shaped spot of the road, which is shady with many rocks on both sides (attention is required due to often rockslides). Soon (in 300 meters) we reach “Kleidi” another natural attraction of the area. At this breathtaking spot, the huge rock stands right above the asphalt passing. Few meters further on, looking above to our right side, to the upper edge of the mountain slope, we can see the so called “Typoma”. Tradition says that this is the place where the icon of Panagia of Prousos (Mary, Mother of Jesus), during the iconoclastic period (9th century A.D.) was hidden and sheltered in the cave of this location where the Holy Monastery of Prousos is situated. 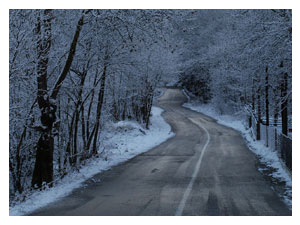 After 3 km ahead, there is on our left side, a road leading to Karitsa village and a little bit further to Dermati village on the southern slopes of Chelidona mountain. The few residents of these two small villages cultivate fruit-bearing trees, sow maize and plant grape vines.

Three and a half kilometers after the “Patimata tis Panagias” (footsteps of Mother Mary), we reach a location called “Dipotama”: at this spot the river named Krikellopotamos, flowing up to this point south of Kaliakouda mountain, joins the river of Karpeniosits and continues further northwestwardly under the name “Trikeriotis” to end and flow into the artificial lake Kremasta. Going further on from Dipotama, you can see Panaitoliko Mountain, whereas the road becomes curvy for the remaining four kilometers until you see the sign “Welcome to Prousos”. 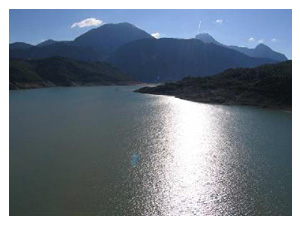