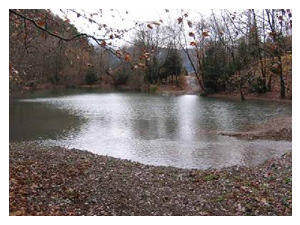 10 km from the exit of Karpenisi, the road leads to Megalo Chorio (2 km), while on the left the road leads to Neo Mikro Chorio and to Paleo Mikro Chorio as well (0,5 km and 3 km respectively). We are already at an important crossroad, namely at the base of two massifs, standing supreme in the southern part of Evrytania: Kaliakouda on our left and Chelidona on our right side, with Chelidona’s highest peaks being invisible from Nostimo up to here.

Turning right and just 500 m. ahead we arrive at Neo Mikro Chorio (New Small Village), which is a newly established settlement (after 1963), as its name reveals, when due to rockslides the residents of Paleo Mikro Chorio (Old Small Village) built their houses here. Neo Mikro Chorio is built on a slope full of fir-trees at 700 m. over the sea surface and its permanent residents are approximately 150. The view from the settlement to Potamia, Kaliakouda right across and Tymfristos (Velouchi) in the background, is a rewarding one to every visitor. The road goes on for further 2,5 km with fir-trees on both sides up to Paleo Mikro Chorio. Just before entering Paleo Mikro Chorio there is a wooden sign (improvised) indicating the road to a small lake (200m. rightwards) formed by the streams of the surrounding area, with quite a lot of water during spring. The landscape around the small lake (at 750 m.) with fir-trees and moisture-growing trees is very picturesque and ideal for camping or for a short stop to relax under the wonderful plane-trees when the have lost their leaves (in winter) creating thusly a magical atmosphere just like a fairy tale. 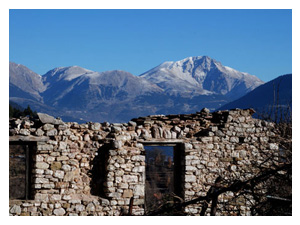 Paleo Mikro Chorio (altitude 800 m.) gains back, little by little, the life it used to have before the big rockslide in January 1963. At the beautiful square of the village, what attracts you the most is the five-tap fountain and a little further on, the beautiful church of “Metamorfosi tou Sotiros”, with an amazing view: the valley of Karpenisiotis river, Velouchi mountain and Megalo Chorio right across with the magnificent Kaliakouda mountain is perhaps the most wonderful view from all the villages of the area, a true balcony to relax all around the year.

Right on this spot there is also a stone-built monument with a sign mentioning that according to Trikoupis, Botsaris had made a pray in the Old Church of Metamorfosi tou Sotiros existing until 1924, before loosing his life at the battle of Kefalovriso in 1823. The old school of Paleo Mikro Chorio hosts the Museum, exhibiting photographs before the rockslide, scriptures from the Occupation period (1941-44), newspaper cuttings with reference to the resistance during this period of time, as well as folk art items.

Just a few meters beyond the church of the village, the asphalt road ends. This is where a wonderful route on foot to the snow-covered Chelidona mountain begins. After 500 m. you encounter the monument of the 11 national martyrs executed on that same spot by the Italians during the II World War, while 800 m. further on there is the small church of Agios Sostis, one more place with a view to “lift you off”.